The  fastest, Easiest, and most cost effective way to
convert your Visual basic 6 apps to VB.net

Yes!   Imagine how much time you'll save just being able to convert your intricate forms, menus, and application settings while preserving exact naming conventions.  Then imagine your code itself being converted to co-exist in the .Net Visual Studio architecture.  Even control array code can be converted, often with no manual intervention at all.

Our developers selected Visual Basic 2010 to be the best conversion point from VB6 to allow the most flexibility to customers.   Anyone with a newer version of Visual Studio such as 2012, 2015, or newer can then open it once it is created.

We strive for a 95% conversion rate (but as you see in our videos, sometimes 100% is possible).

Converting is easier than recreating your applications.

Convert all your VB6 apps quickly

FOR WINDOWS 7, 8, 10, & ABOVE
Watch VB6 conversion videos for yourself  by clicking here ---> Video.
The picture below shows an actual form that has been automatically converted from VB6 to VB.Net  - even the words "Visual Basic 6" were converted. :) This demonstrates how even child controls on frames with other frames nested as children still convert correctly.

Quick! What is different between the forms? 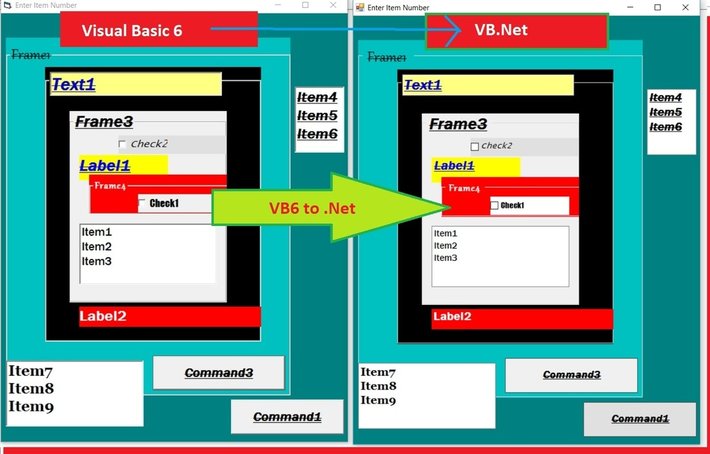 ​Welcome to the Avotova
​VB6 to VB.Net converter website.    Our primary goal over the last few years has been to develop a converter that can take older VB6 apps and convert them to VB.Net applications as seamlessly as possible.

The Avotova "Conversion Wizard" is a small application  that allows you to easily and cost effectively transform your apps to robust applications that can run on 64 bit Windows Operating Systems.

Upon signing up for a free trial below,  you will receive a license ID and a link to where you can download the wizard. Point it at one of your smaller apps for best results...the trial version limits how many controls, functions, etc that can be converted.  Licensed editions do not.

The wizard communicates with a powerful conversion server.  Your old code goes in and newer VB.Net code is returned. If you like what you see, you can choose a license that fits your needs.

For government use (and companies that would rather us convert their apps in-house), we also offer a consulting service where you only need to provide the source code and we do the rest.  It's fast, simple, and more cost effective than hiring a team of developers to do it yourself.   Once converted, we can even manage your code.

Act today before this offer goes away!

Listen to what our users are saying...